BALT has an additional $33,750,000 available under its credit facility, and is able to borrow up to $23,500,000 of that amount for working capital purposes. The company’s credit facility matures in November 2017. Based on current debt outstanding, BALT does not have any scheduled debt repayments until November 2016.

Email ThisBlogThis!Share to TwitterShare to FacebookShare to Pinterest
Tags: BALT

Overseas Shipholding Group: Rumors Of Its Financial Demise May Not Be Greatly Exaggerated

Overseas Shipholding Group's (OSG) shares fell precipitously again yesterday after the company announced that it was contemplating filing for bankruptcy protection. The latest news came amid a dramatic disclosure from the company that a (yet-unexplained) tax issue involving its international operations had rendered its financial statements unreliable.

Until yesterday the main issue affecting the company's stock price appeared to be a funding gap between an expiring credit facility of $1,500 million (in February-2013), and a $900 million forward start credit facility.

Estimates from the company and analysts put the funding gap between $100 million to $300 million. But based on yesterday's news, I believe the funding gap may indeed be substantially higher.

The $900 million forward start credit facility will not be available to the company before February-2013. The facility is subject to an adverse materiality clause and compliance with financial covenants among other terms.

Posted by Lambros Papaeconomou at 9:19 AM

Email ThisBlogThis!Share to TwitterShare to FacebookShare to Pinterest
Tags: OSG 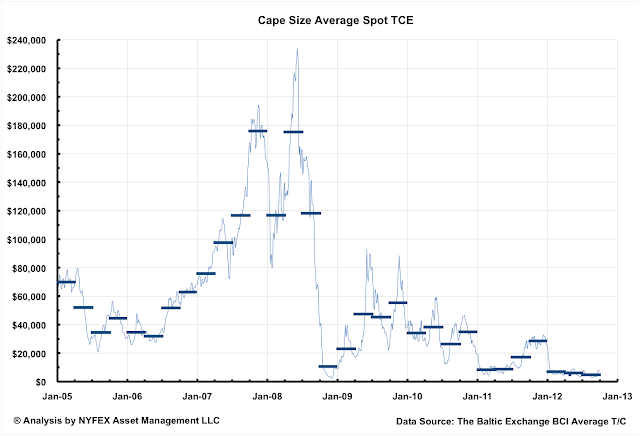 Posted by Lambros Papaeconomou at 11:50 AM

How To Make Sense Of EBITDA In The Shipping Industry

EBITDA (Earnings before Interest, Taxes, Depreciation & Amortization) is a very popular, but also controversial measure of operating performance in the bulk shipping industry. It is popular because many investors base their investment decisions on EBITDA figures. In fact, most shipping companies report EBITDA in their earnings report. It is also controversial, because it is not recognized by US GAAP and lacks a universal definition. In this article I will look closely at EBITDA, its advantages and drawbacks, and how to properly use it when considering an investment in shipping. I will use as sample four publicly traded shipping companies, namely Diana Shipping Inc. (DSX), Eagle Bulk Shipping Inc. (EGLE), Genco Shipping & Trading Limited (GNK), and Safe Bulkers Inc. (SB).

One of the greatest advantages of EBITDA is that it is readily available, almost as ubiquitous as net income or earnings per share. Even when it is not reported (a notable exception in our sample is Diana Shipping Inc.), an investor/analyst could easily calculate it based on the company's income statement.

Continue Reading
Posted by Lambros Papaeconomou at 10:01 AM